This tour is particularly suited to families, looking for a day out of London.

A 30-minute train ride from central London will take us to Hampton Court Palace for a private guided tour. Originally built for Thomas Wolsey in 1515, it was ‘acquired’ by King Henry VIII who, because of its proximity to the River Thames, and its established hunting grounds close by, enlarged its facilities, becoming one of the largest and grandest of Henry’s palaces, where much of the court machinations involving his various wives took place. See the Great Hall with its original wall hangings and extraordinary hammer-beam roof, where Henry entertained on a lavish scale. 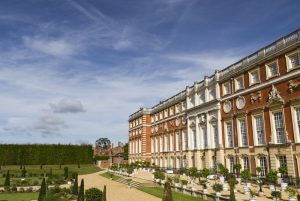 In the late seventeenth century much of Henry’s original palace was demolished to provide one that sought to rival those of the French king Louis XIV. Sir Christopher Wren, creating a spacious English Baroque palace fit for their majesties, undertook the work on behalf of King William III and Queen Mary II.

Today, Hampton Court is in fact two palaces, the front being Tudor and the rear classical Baroque. This strange mixture actually worked as a palace up until the time of George II in the eighteenth century when it was no longer used as such. We will visit this magnificent edifice with its beautiful grounds that also contain a maze, and its well tended formally planted parterre gardens. We can also visit Henry VIII’s indoor tennis court that is still used today.

*The tour cost is for a group of up to 10 persons and NOT per person. So, for example, a group of 5 persons the cost is £60 per person. The fee does NOT include admission to any of the sites, or travel costs. Mine are covered.