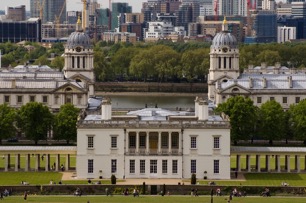 Take a trip out to Greenwich by boat from Central London, an opportunity to see the city from another view. We begin the Greenwich private guided tour at the Visitor Centre to gain an overview of the 1000 year history of the area, which is now a World Heritage Site. Greenwich, the centre of Maritime England, was at one time home to a royal palace where King Henry VIII and Elizabeth I were born, The buildings, with the exception of the Queens House built in the early seventeenth century which can still be visited, were razed later that century to facilitate the building of the Royal Hospital for Seamen (later the Royal Naval College), which can be visited today, its Painted Hall a magnificent space that has featured in many films including Pirates of the Caribbean, Les Miserables and Skyfall.

We will also visit the National Maritime Museum where one can see many exhibits to do with England’s pre-eminence as a maritime nation, including the uniform, of her greatest naval hero, Lord Horatio Nelson, that he was wearing when he died at the battle of Trafalgar in 1805. In the same vicinity is the original tea clipper Cutty Sark, now in dry dock, which we will also visit, before visiting the Greenwich Market for a little shopping and some lunch.

In the afternoon we will walk to Greenwich Park and the Royal Observatory to see the Prime Meridian of the world, where east and west longitude meet. There is a fascinating exhibition inside the Old Observatory built in the seventeenth century for the first Astronomer Royal, John Flamsteed, telling the story of how the problem of longitude calculation at sea was resolved by John Harrison’s Chronometers. We will also see the original telescopes used for exploring the stars in the nineteenth century.